A small exhibition to accompany 50 Years of Keith Thomas's Religion and the Decline of Magic.

Reflecting the hybrid nature of this event, this small exhibition can be viewed in the Library by those attending the reception of this event, as well as online on this page.

The quotations are taken from the Penguin edition of Religion and the Decline of Magic, and relate to the openings displayed in the in-person exhibition.

The image of a depiction of the Devil giving magic puppets to witches is from the Agnes Sampson trial, 1591 (via Wikimedia Commons).

but most members of the educated classes remained slow to accept the full implications of his thesis. "Many deny witches at all, or, if there be any, they can do no harm," wrote Robert Burton in 1621. (p. 685)

Burton, Robert. The Anatomy of Melancholy. What It Is, with All the Kinds Causes, Symptomes, Prognostickes, & Severall Cures of It, in Three Partitions, with Their Severall Sections, Members & Subsections, Philosophically, Medicinally, Historically, Opened & Cut up. [8th edition]
London: Printed for Peter Parker at the Signe of the Legg & Starr in Cornhill over against Ye Royall Exchange, 1676.

The trial of Essex witches at Chelmsford in July 1645 was conducted, not by justices of assize, but by the J.P.s, presided over by the Earl of Warwick, who had no clear judicial status. (p.545) 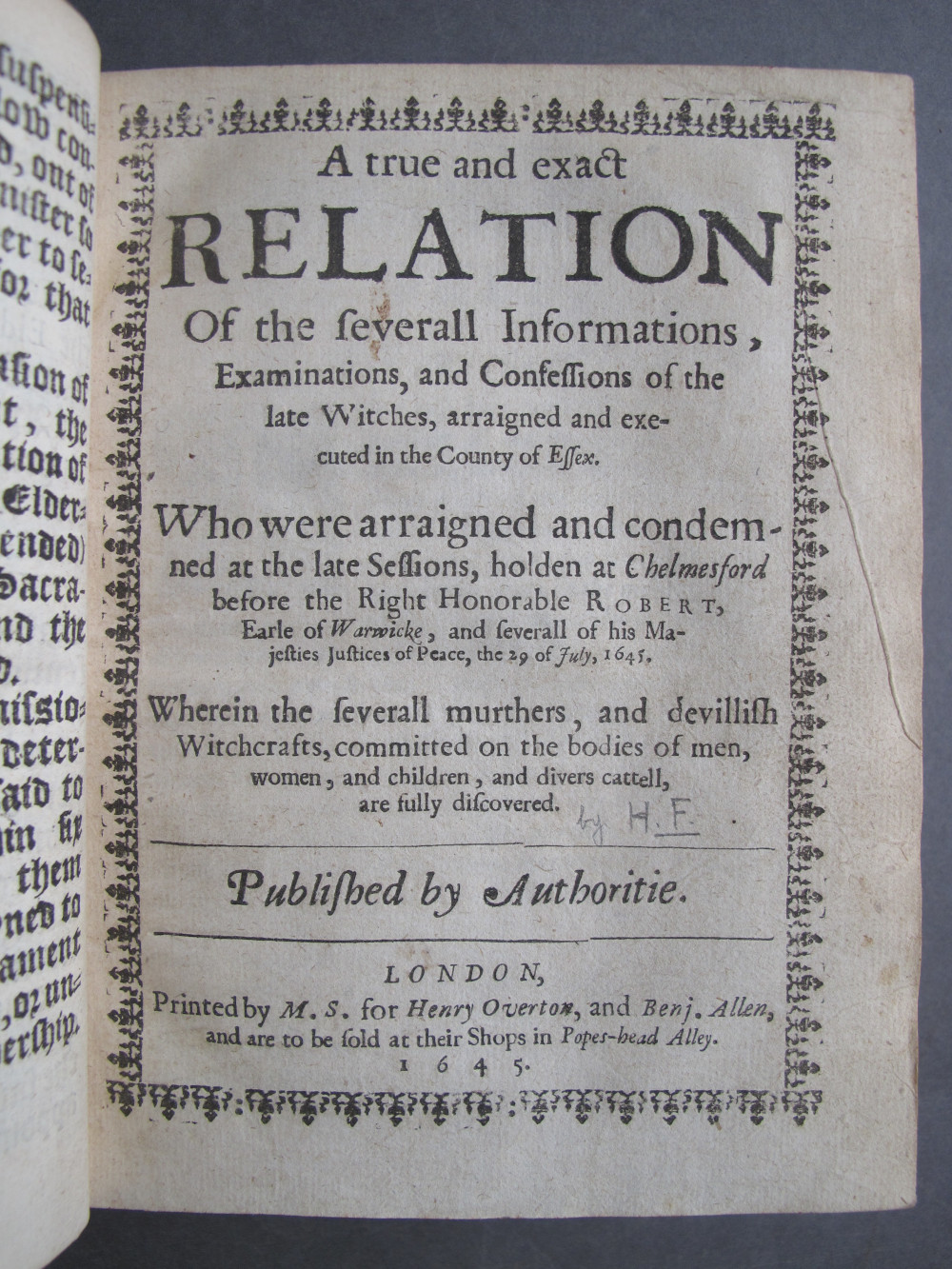 H. F., A True and Exact Relation of the Severall Informations, Examinations, and Confessions of the Late Witches, Arraigned and Executed in the County of Essex. Who Were Arraigned and Condemned at the Late Sessions, Holden at Chelmesford before the Right Honorable Robert, Earle of Warwicke, and Severall of His Majesties Justices of Peace, the 29 of July, 1645.
London: Printed by M.S. for Henry Overton, and Benj. Allen, and Are to Be Sold at Their Shops in Popes-head Alley., 1645.

Evidence of maleficium was enough to convince the neighbours. In Elizabethan times it also seems to have been enough to secure a conviction in the courts. As William Perkins laments, "Experience shows that ignorant people...will make strong proofs of such presumptions, whereupon sometimes jurors do give their verdict against parties innocent". (p.687) 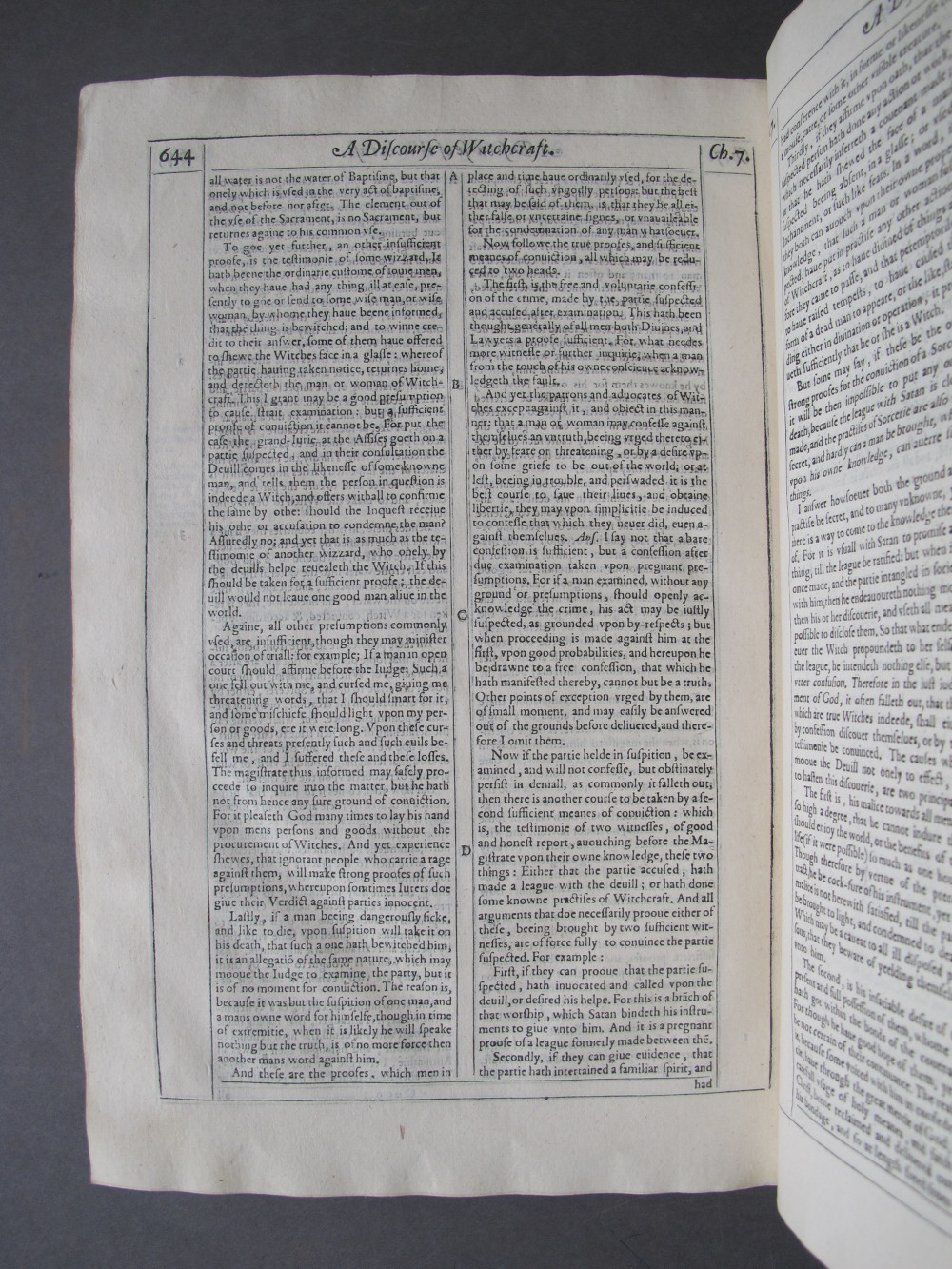 Perkins, William. "A Discourse of the Damned Art of Witchcraft" in: The Workes of That Famous and Vvorthie Minister of Christ, in the University of Cambridge, Mr. W. Perkins.
Cambridge: Printed by Iohn Legate, Printer to the Vniuersity of Cambridge. 1608. And Are to Be Sold at the Signe of the Crowne by Simon Waterson, 1608.

an old woman’s reputation for witchcraft might be her last line of defence, ensuring that she was decently treated by her fellow villagers [...] One of the characters in George Gifford’s Dialogue observes of a suspect, "I have been as careful to please her as ever I was to please my own mother." (p.674)

Gifford, George. A Dialogue concerning Witches and Witchcrafts. In Which Is Layed Open How Craftily the Diuell Deceiueth Not Onely the Witches, but Many Other, and so Leadeth Them Awrie into Manie Great Errours.
London: Printed by R[ichard. F[ield] and F[elix] K[ingston] and Are to Be Sold by Arthur Iohnson, at the Signe of the Flower-de-luce and Crowne in Paules Church-yard., 1603.